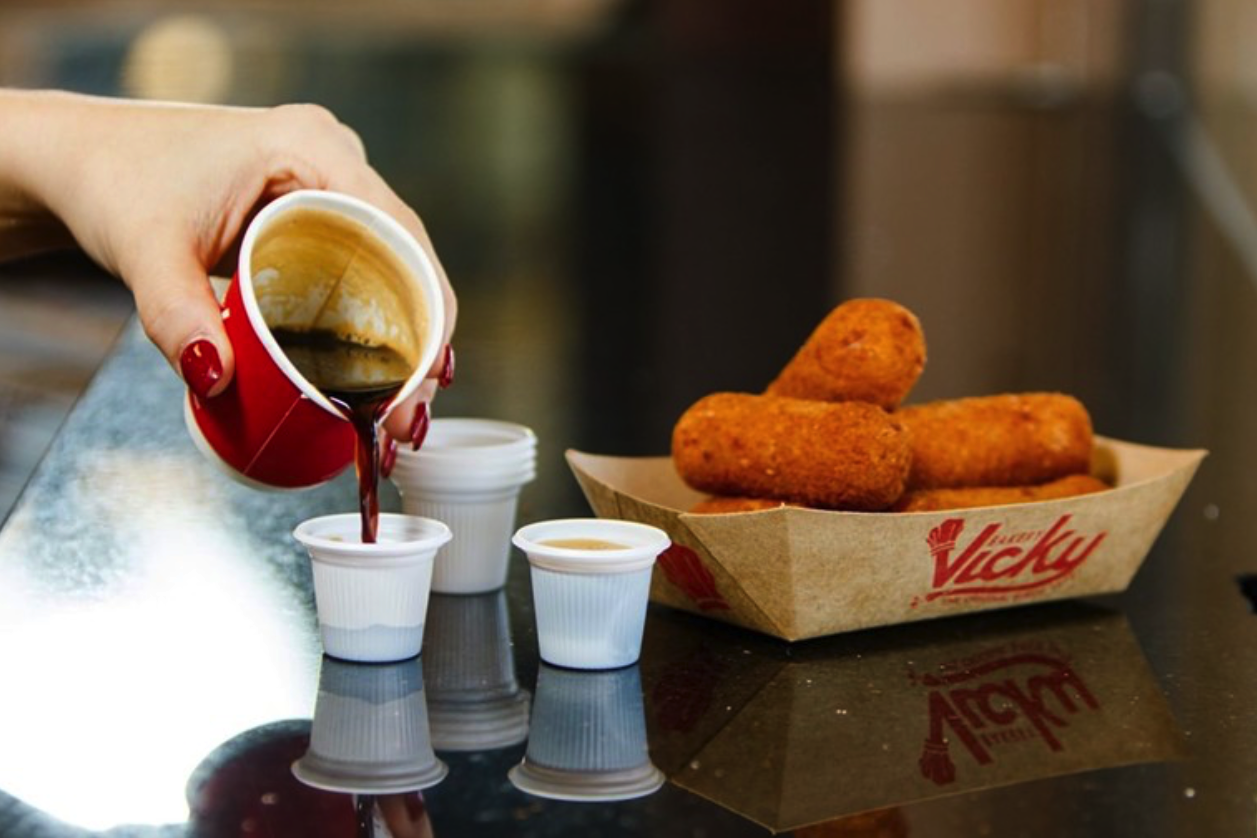 Vicky Bakery, one of South Florida’s original family-owned Cuban bakeries, has opened in downtown Fort Lauderdale on Las Olas Boulevard. Operating since 1972, the new location is located across from Huizenga Plaza and offers fans of the family’s fare a chance to find pastelitos and croquetas further north. The authentic Cuban pastries are crafted fresh daily by a team of bakers and chefs who prepare an extensive variety of bread, pastries, desserts, breakfast items, sandwiches, cakes, and coffee. Daily 7 a.m. to 7 p.m. 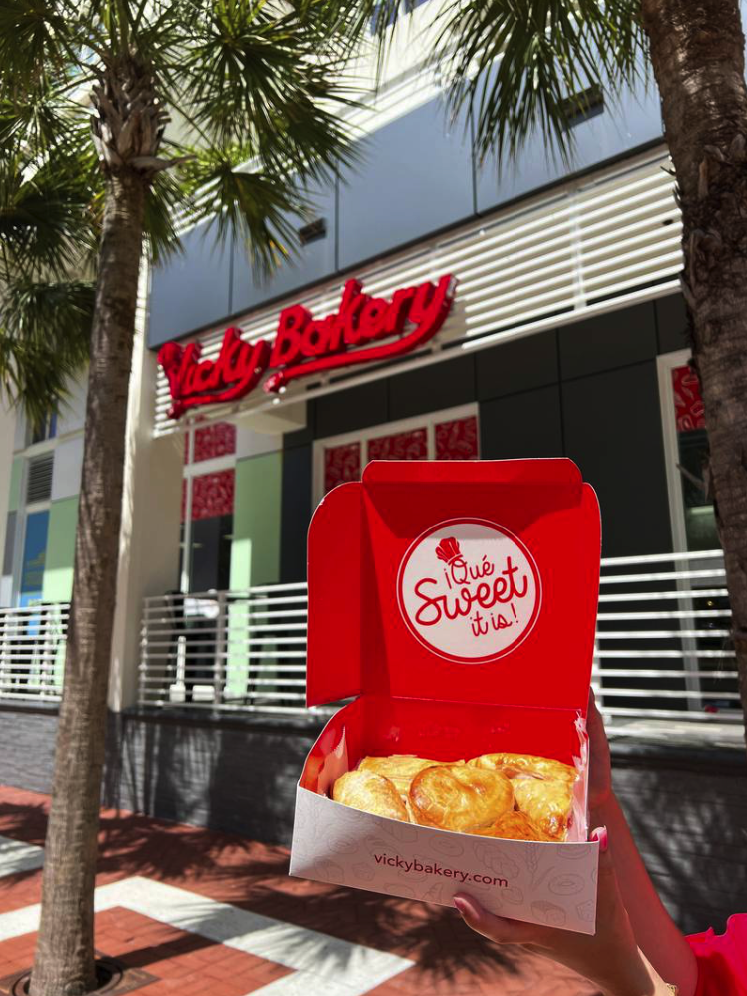 “We live and breathe South Florida and have called this our home for a very long time,” Alico Pina says, co-owner of Vicky Bakery Las Olas. “We know the people in and around downtown Fort Lauderdale are going to absolutely love our world-famous pastelitos, croquetas, café, and other amazing and authentic Cuban bakery items. Created in our own kitchens every day, our bakers and chefs prepare an extensive variety of breads, pastries, desserts, breakfast items, sandwiches, cakes, coffee and more so we have something to satisfy every appetite, whether it’s a sweet indulgence or even a loaf of our healthier, vegan Cuban bread.”

Pina and her business partners Nosbely Toledo and Nosdiel Silva have been active brand ambassadors of Vicky Bakery even before signing the rights to develop the Las Olas location. The business partners own six Vicky Bakeries in total, including locations in Davie, Miramar, Florida International University’s (FIU) North Campus, FIU South Campus, University of Miami and the new downtown Fort Lauderdale site. The entrepreneurs have a seventh Vicky Bakery under construction in Coral Springs that they plan to open by the end of the year.

“When we opened our first location in Miramar in 2016, we could have never imagined our success today as multi-unit operators of Vicky Bakery,” Toledo says, co-owner of Vicky Bakery Las Olas. “It’s really a testament to the incredible menu but also to the systems and procedures that Vicky Bakery has established over 50 years in business. That kind of tradition and operational experience has proven invaluable as we continue to grow, opening Las Olas and Coral Springs later this year. Developing Downtown Fort Lauderdale was an easy decision because we knew people can’t resist our specialty Cuban pastries made with secret family recipes passed down from abuelito to abuelo and now on to our generation.”

Vicky Bakery began with a vision in 1972 by founders Antonio and Gelasia Cao, who decided to open a bakery and make pastries the way they first learned in Cuba. Its Cuban roots and belief in quality, variety, convenience and experience have helped the brand expand throughout Florida. It has grown to nearly 20 locations across South Florida, with new bakeries soon opening in Palm Beach, Orlando and southwest Florida, among other markets.

“There is something timeless and classic about our menu. To this day, we haven’t changed the recipes because our customers, no matter which location they visit, always tell us it’s the best they’ve ever eaten,” Nosdiel Silva says, co-owner of Vicky Bakery. “Everyone can relate to our menu because there is authenticity behind it. Once you bite into our crunchy and pillowy pastelito, you are automatically transported back to the original La Vencadora bakery in Havana, Cuba, where Antonio and Gelasia, our founders, first fell in love and learned to bake before fleeing communism’s grip on the island. We’re absolutely thrilled to be open in Downtown Fort Lauderdale and introduce the community to Vicky Bakery.”

The new Vicky Bakery in Downtown Fort Lauderdale is open seven days a week from 7 a.m. to 7 p.m. To learn more about Vicky Bakery, visit vickybakery.com.

FORT LAUDERDALE, FLA. (Sun Sentinel) – Vicky Bakery has opened a location in downtown Fort Lauderdale, on Las Olas Boulevard across from Huizenga Plaza at the base of the Andrews Avenue drawbridge.

This Miami-based brand now has a bakery in downtown Fort Lauderdale, on Las Olas Boulevard at the base of the Andrews Avenue drawbridge and across from Huizenga Plaza. The new location is one of six Vicky Bakery franchises owned by SoFlo entrepreneurs Alicio Piña, Nosbely Toledo and Nosdiel Silva. The hours are 7 a.m. to

7 p.m. Mondays through Saturdays at 7 a.m. to 3 p.m. Sundays. The trio have plans for a seventh Vicky Bakery to open in Coral Springs in a few months. According to Alejandro “Alex” Santiago, the CEO of the brand, Vicky Bakery is marking its 50th anniversary with ambitious expansion plans northward that include additional franchises in Pembroke Pines, Plantation, Boca Raton and West Palm Beach by January and February 2023. 4 W. Las Olas Blvd., Fort Lauderdale; 954-314-7727; VickyBakery.com

HIALEAH, FLA. (WSVN) – The owner of Vicky Bakery wanted to make sure firefighters and officers in Hialeah had a great start to their Thursday morning by donating several treats and pastelitos.

Pedro Cao, along with several employees of his bakery dropped off the Cuban pastries to the Hialeah Fire Station #1, located at 93 East Fifth Street, on Thursday morning.

“We’re here giving thanks to all the first responders from the Vicky family for all they do, leaving their houses every day to protect all of us. Thank you,” said Pedro Cao, the owner of Vicky Bakery.

“The Vicky bakery family has been in this city for over 40 years, and in good times and bad they are always there to help the community,” said Hialeah Fire Rescue spokesperson David Rodriguez. “It’s not just us, it’s the community always helping out the community in times of need, and it just makes us happy.”

The crew enjoyed pastelitos, sandwiches and Cuban pastries to start their day.

Vicky Bakery Will Ship Pastelitos to Your Valentine

Vicky Bakery Will Ship Pastelitos to Your Valentine 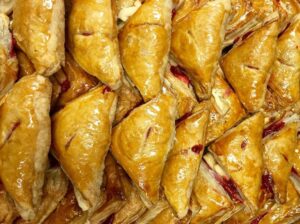 MIAMI, FLA. (Miami New Times) Valentine’s Day is fast approaching, and your sweetie is in another city. The traditional way to show your love is to order some flowers or maybe a box of chocolates. But there’s a much better (and more Miami) way to show you care: Send them a box of a dozen pastelitos.

Vicky Bakery has just launched nationwide shipping of its pastelitos throughout the contiguous 48 states.

Customers can order pastelitos in three flavors — guayaba, queso, and guayaba and queso — by the dozen or two dozen. Boxes come in a choice of one flavor or an assortment of all three. Orders can be placed online at vickybakery.com.

Pastelitos will arrive frozen on dry ice within 48 hours of ordering. Each shipment will come with instructions on how to bake them. This guarantees your beloved will have nothing but warm thoughts of you when the scent of freshly baked pastries wafts through their home.

The pastelitos start at $19.99 for a box of one dozen, and shipping costs vary based on location. Shipping ranges from $10 to $50, with a two-box minimum.

Vicky Bakery’s Pedro Cao says the idea of shipping the pastelitos came about after longtime customers who moved from the Miami area began requesting the bakery’s treats. “Our fans extend way beyond Miami, and nationwide shipping was our solution to loyal customers who don’t live close to our stores.” Cao says he’s happy to share a taste of Miami with people who may not be able to travel here. “We are excited to be able to take a piece of what we’ve grown up with and offer it into homes across the nation.”

The bakery, which started as a little pastelito shop in 1972, has grown to 15 locations offering Cuban pastries made with family recipes straight from Cuba. The bakery has also kept up with the times by introducing a vegan version of Cuban bread made without the traditional lard.

For now, only pastelitos are available for long-distance shipping, but if your true love lives in South Florida, the bakery can make a special holiday platter of pastelitos and croquetas for a very Miami Valentine’s celebration. 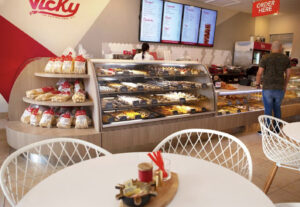 Santiago aim to open 50 locations of the family-owned brand across the U.S. over the next five years, the Business Journal has learned.
Cao, who helped found the company along with his father in 1972, said some of the new
locations will be company-owned, but the biggest batch will open through licensing partnerships.
He said the chain already has between 150 and 200 interested potential licensees.

The brand has grown mostly through licensing agreements over the last 10 years, with a majority
of its locations in the last decade opening through outside partners. Santiago said the company
purposefully slowed its expansion as they built up manufacturing capabilities at the warehouse in
Medley, just west of Hialeah.

They are currently in the process of developing a training program for new locations, which
stalled the company’s growth plans until now, he said.

“We quickly reached the point where the three of us can’t handle it all,” Santiago said. “To be
able to achieve the standards that we uphold to, we needed help.”

Once the training program is in place, the next step would be national shipping and distribution.
He said shipping could be ready to launch early next year. Frozen versions of iconic Vicky Bakery
products will be available for purchase online for consumers to reheat at home.

Vicky Bakery’s online expansion will allow the company to see where physical store locations in
other markets in the U.S. could do well. One such market that the company already plans to
break into is North Carolina, where Oramas will move to and help facilitate new openings there.
Oramas said he expects to open the first Vicky Bakery outside of Florida in 2020 or 2021.

Part of the company’s plan for success in new markets is an updated store design. The company
partnered with a new design team to create a more modern, updated Vicky Bakery look, Santiago
said.

“We’ve locked in that 80-year-old Cuban demographic,” he joked. “Now we’re trying to bring in
and be accessible to my daughters.”

The company doesn’t plan to remodel already-established locations, as those perform well with
the “old school” aesthetic, Cao said. However, all new stores will carry the updated design.
South Florida won’t miss out on the beloved brand’s expansion. There are plans to open new
Vicky bakeries in Palmetto Bay, Hollywood and Fort Lauderdale, Cao said.

Santiago likened Vicky Bakery’s expansion path to a game of the board game Risk.
“We started on this peninsula, and we’re going to work our way up until we take over all of North
America,” he joked.